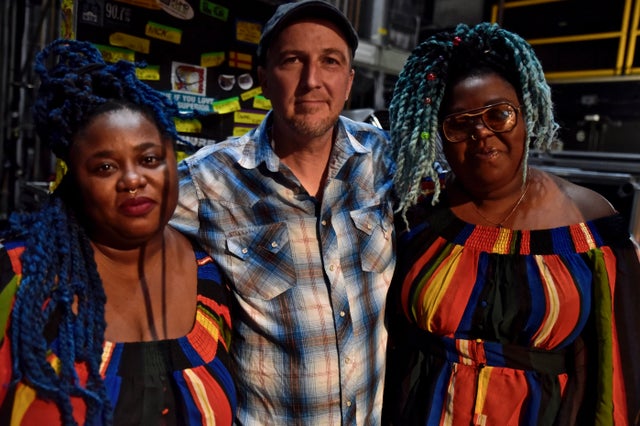 To make an anti-fascist record, you must keep kindness and compassion in the foreground. That’s just what singer-songwriter-guitarist Peter Mulvey and SistaStrings (cellist-vocalist Monique Ross and violinist-vocalist Chauntee Ross) did. Love Is the Only Thing—out on August 22, 2022—started when the musicians gathered at their beloved Café Carpe in Fort Atkinson, WI to record a live album and a studio one.

Live at the Café Carpe was released in October 2020, but the pandemic put the studio album on hold. The bright light of family illuminates this record and all that went into making it. Its existence hinges on the way we take care of each other, from its fan-supported funding to the sanctuary of Café Carpe to the blood sisterhood of the Rosses to Mulvey’s newfound fatherhood.

Milwaukee based SistaStrings bring all the beautiful versatility of their cello and violin music, along with vocal harmonies, to the project. Classically trained string players who grew up singing in church, Monique and Chauntee were destined to defy conventions of genre and race alike, blending R&B, gospel, and classical sounds. In 2022, they performed at the Grammy Awards with Allison Russell and Brandi Carlile. The Rosses will be performing with Carlile at a Madison Square Garden concert in October.

Mulvey met the Rosses in 2016, and all three felt an instant kinship. “Peter has been the complete definition of an ally. We found a home in the folk/Americana realm when we began working with Peter and that gave our career the direction it was lacking,” says Monique.

Making this album at such a tumultuous time in history reinforced their role as activists just as much as musicians. “Finding refuge and rejuvenation in these songs with this group of musicians was healing and personally some sort of mission statement for why we even make music in the first place,” Chauntee remembers.

Mulvey and SistaStrings music makes it abundantly clear that the love songs and the protest songs have been about the same thing all along.